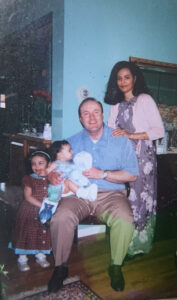 It was 8:50 AM, on Sept. 11, 2001, when Joe called the house and urged me to turn on the television news. I was already watching and knew that an airplane had crashed into the North Tower of the World Trade Center. The upper half of the tower was engulfed in thick smoke and flames. He asked about our girls, and just before hanging up the telephone, he worried, “Babe, this is going to be really bad. A lot of people are going to die.” There was dire concern in his voice. He was getting ready to go to the World Trade Center site, and we said a quick goodbye. My living room was bright with sunlight, and I was struck by how clear and blue the sky was. It was one of the most beautiful fall mornings that I could remember. Watching NY1 News, I noticed what looked like a small black speck, moving across the television screen, and suddenly the South Tower erupted into smoke and fire. The speck was an airplane. I knew then, that what I was watching unfold, was no accident. Too nervous to sit, I stood and rocked side to side, as I held Isabel (1 year old), in my arms. I could hear Amanda, (3 years old), playing in her room. I watched in shock, as the World Trade Center became the scene of a dramatic, explosive, fiery attack. I couldn’t believe what I was seeing. After some time, I noticed the South Tower appear to sway a little before it collapsed onto itself. I felt cold, and lightheaded all at once, as I reached for the telephone to call the firehouse. The fireman that answered informed me that the truck was out. Joe and his team of six firefighters had gone to the World Trade Center site in lower Manhattan. The hours that followed were full of fret, angst, and finally, desperation when I dialed Joe’s cell phone at approximately 4:30 pm that afternoon, begging him to PLEASE CALL HOME. I needed to hear his voice. I needed to know that he was okay. Amanda was beginning to ask questions, she saw the images on the television, and sensing my fear and distress, she started to cry out for her father. Her wails were unbearable. With trembling hands, I picked up the telephone to call the firehouse, yet again. They had no news on the whereabouts of the seven fellow firefighters that went to lower Manhattan on the ladder truck. I never heard Joe’s voice again.

My father, who was recently retired, dropped by a few times a week to get updates on the status of the ground zero search and recovery efforts. He brought in a bagful of the girls’ favorite groceries every time that he dropped by. On Friday, Nov. 10, 2001, we held a beautiful, touching funeral service for Joe. On Monday, Nov.12, 2001, my father died, when American Airlines flight #587 crashed in Rockaway, Queens. My mother was supposed to join my father on the flight to the Dominican Republic, where they owned a family house, but she did not join my father on the trip when I asked her to please stay with me, in the event that Joe’s body was recovered. I didn’t want both of my parents to be away if Joe’s remains were found. The morning that Flight #587 crashed in Rockaway, with my father on board, I ran outside and ripped off the yellow ribbons that my girls and I had tied around the large tree in front of our house. I cried for days, weeks, and months. The experience of losing both my father and husband broke me. The FDNY family helped to put me back together again. Functions and events held for widows and children forced me to engage and socialize with other FDNY and NYPD families that lost loved ones in the line of duty, it helped to make me feel less alone in my grief. Answer the Call sent me and my girls generous financial help that always relieved me of stress, worry, and anxiety. In recent years, the assistance of Answer the Call, has literally saved the day, during difficult financial times such as the, 2008 recession, Hurricane Sandy, and the COVID-19 pandemic.

Almost twenty years have passed since September 11, and though the girls and I have muddled through many milestones together without him, life hurts without Joe. We pull through each time, but it’s never easy without him. Joe was a big, bear of a guy, with a bellowing voice that filled the room. He loved being a father to his girls, and insisted that a good education was particularly essential for girls and their success. He loved being a family man. Family gatherings were special when Joe was around because he was happiest when he was with his family. Joe loved St. Patrick’s Day, Easter, Thanksgiving, and Christmas- he loved holidays because they brought the family together. Family was everything to him. One of my most cherished memories of Joe is that of him taking the girls out on their tricycles, up and down our block, for an hour, even though he was exhausted when he came home from working a 24-hour shift at the firehouse. I remember looking out the window, watching Joe beam with love, soaking up every giggle. Life has been difficult, challenging, and outright scary without Joe for comfort and protection, but his spirit lives in me, and it gives me hope, strength, and courage. Not a single day goes by without thoughts of him. I hope that he watches over us, I hope that he’s proud of the life that the girls and I have managed to put together, and I hope that he is at peace though he was taken from us too soon. I cannot say that 9/11 was God’s plan. What I can say is that I have been changed by the experience. I try harder, do more, do better, because I owe it to the spirit and memory of a family man that was an everyday American hero that believed in work, country, God, and family.