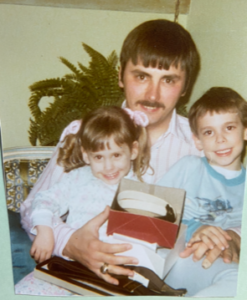 “On December 22, 1980, my William (a Port Authority Police Officer) was on the Journal Square PATH Train when he attempted to arrest someone for disturbing passengers. At the next stop, he stepped off and tried to make the arrest. A fight erupted and both of them fell onto the tracks at which time the assailant pulled a gun and shot my William to death – he was 32 years old. We buried him on Christmas Eve that year. Our children were 5 and 6 years old. They have gone through their entire life without him and I will sadly spend the rest of my life knowing they missed out on such a wonderful father. The assailant was released after only 22 years and he is now free to enjoy his Christmas while my children and I spend ours reminiscing year after year the short time we had with him.

Once the Benefit Fund came along our lives were changed. It’s not just the financial help, which makes such a difference after all these years, but they just always lift my heart and make me and my children feel like my William will never be forgotten. That means the world to us since it has been so many years now. I can never thank them enough for all the work they are doing for so many families like ours. I can never thank the supporters enough. I am in tears even writing this for all everyone is doing for us!”